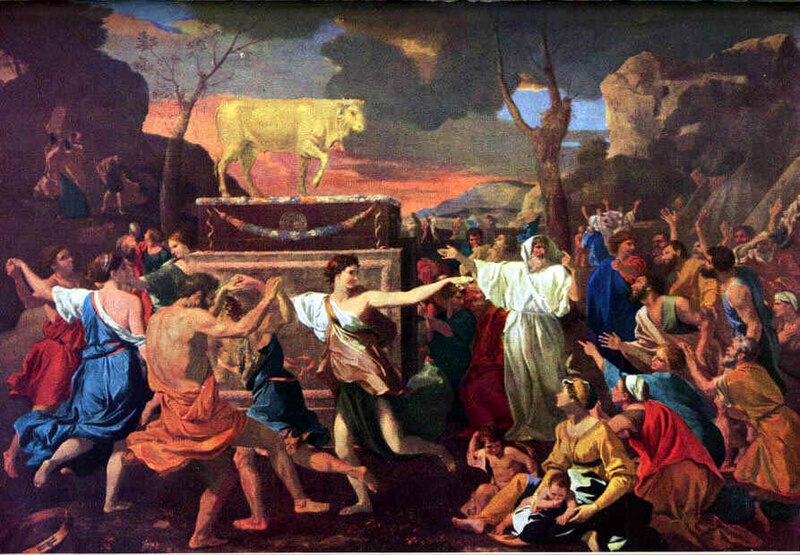 The Adoration of the Golden Calf by Nicolas Poussin.

The word ‘secular’ is derived from the Latin word saeculum which meant a long period of time, and in particular the age or period of world history to which the present belongs. One age or saeculum when it comes to an end was thought to be followed by another, which could, of course, be very different in character. Endless time was described in the phrase in saecula saeculorum, translated ‘for ever and ever’. It is worthwhile mentioning that the equivalent Greek word aeon, along with its derivatives, occurs quite often in the New Testament and is translated as ‘eternity’, and ‘eternal’.

Now the word saeculum came to mean ‘the world of this present age’, i.e. the present world. In Christian usage in the course of time we find the word ‘secular’ being used to describe this visible tangible world in contrast with another world, the unseen supernatural world, which is the world of eternity. Any activity directed mainly to the natural world is described as secular, while any activity directed to the supernatural world is ‘religious’. The distinction was found in the Christian priesthood. Those who withdrew from the world to live the life of Christian devotion in the monastic cloister were the ‘religious’, while those who ministered in the everyday world were the ‘secular’ priests.

Russian Orthodox Metropolitan Hilarion Alfeyev, head of the Synodal Department for External Church Relations, stated recently, “The battle between the religious and secular worldview is today raging not in academic auditoriums or on the pages of newspapers. And the subject of the conflict is far from being exhausted by the question of belief or lack of belief in God. Today this clash has entered a new dimension and touches upon the fundamental aspects of the everyday life of the human person.

Militant secularism is aimed not only at religious holy sites and symbols by demanding that they be removed from the public domain. One of the main directions of its activity today is the straightforward destruction of traditional notions of marriage and the family. This is witnessed by the new phenomenon of equating homosexual unions with marriage and allowing single-sex couples to adopt children. From the point of view of biblical teaching and traditional Christian moral values, this testifies to a profound spiritual crisis. The religious understanding of sin has been conclusively eroded in societies that until recently thought of themselves as Christian.

Particularly alarming is the fact that we are dealing in this instance not only with a choice of ethics and worldview. Under the pretext of combating discrimination, a number of countries have introduced changes in family legislation. Over the past few years single-sex cohabitation has been legalized in a number of states in the USA, a number of Latin American countries and in New Zealand. This year homosexual unions have attained the legal status of ‘marriage’ in England and Wales and in France.”  From Met. Hilarion: Militant Secularism and Radical Islamism Threaten Christianity, November 22, 2013.

Metropolitan Jonah also warns us about the radical departure from traditional Christianity we’re experiencing in the West and the dangerous consequences of such actions. He identifies key challenges that Christians face in the increasingly hostile and secularized culture we find ourselves living in and the increasing persecution we will encounter. He also emphasizes the importance of traditional Christian denominations to stand united in opposing such falsehoods …There is a radical cultural shift away from traditional Christianity, toward something unrecognizable. The “Secularists” (for lack of a better, non-pejorative term) reject the virgin birth of Christ, the resurrection, even His Divinity; that His words are recorded in the Scriptures and that the Scriptures are even relevant to our days; rather they are oppressive and keep humans in darkness.   He made these statements when he addressed the ACNA Assembly in 2012.

He concluded his speech with these words, “Let us listen to the words of St. Paul:

For Christ did not send me to baptize but to preach the gospel, and not with eloquent wisdom, lest the cross of Christ be emptied of its power. For the word of the cross is folly to those who are perishing, but to us who are being saved it is the power of God. For it is written, “I will destroy the wisdom of the wise, and the discernment of the discerning I will thwart.” Where is the wise man? Where is the scribe? Where is the debater of this age? Has not God made foolish the wisdom of the world? For since, in the wisdom of God, the world did not know God through wisdom, it pleased God through the folly of what we preach to save those who believe. For Jews demand signs and Greeks seek wisdom, but we preach Christ crucified a stumbling block to Jews and folly to Gentiles, but to those who are called, both Jews and Greeks, Christ the power of God and the wisdom of God. For the foolishness of God is wiser than men, and the weakness of God is stronger than men. (1 Corinthians 1:10-13, 17-25, Revised Standard Version)”

Heck even Chuck Norris states that Secularism may be the single greatest threat that America has ever faced.  “Shockingly, although the majority of Americans continue to claim to be Christians, a Gallup poll discovered that forty-five percent of the population would support an atheist for President. Such a survey is a clear indication that the secularization of our Christian nation is alive and well. Secularization, if you are not aware, will signal the end of America as we know it. For example, soon the secular government, blinded by their lack of common Christian decency, will (as they did with public schools) banish the Bible from the White House, before banning it in church and eventually outlawing it in your very own home! Will real Americans continue to stand for this outrage? I pray to the Lord, no.”

Secularization, as it is at present spreading and developing, is dividing the modern world into two. On the one hand there is an official and institutional form of Christianity seeking to be faithful to the beliefs and forms of Christendom’s past glory, and on the other there is a secular, non-religious society which tends to assume that emancipation from all religious faith is part of the goal of complete secularization.

“The fastest-growing religion in the world is not Islam or Christianity; the symbol of this rising faith is not the star and crescent or the cross, but a dollar sign. This expanding belief system is radical consumerism.

Many American Christians have decided they can, to put it bluntly, love both God and money.

Our Scriptures tell how God’s people were often intrigued by the promises of other gods. They did not denounce him as they began to worship Baal or any other god. Rather, they often continued to profess loyalty to God while they pursued their functional god. American Christians have incorporated their devotion to consumerism with their Christian faith.

It is now clear that the primary threat to Christianity in America is consumerism—not liberalism, fundamentalism, Darwinism, secularism, or any other ‘–ism.’”

So which is it a threat or not?  Militant secularism is our idolatry.  Or is it one of many idolatries that are tearing at the very fabric of our Christian foundation?  You have to make a decision with much prayer.

As for me, Secularism is the enemy of Biblical Christianity. The Christian life is based on the Word of God and directed to God’s glory. Satan will try to destroy this God-centered living. God is not satisfied with partial service. Because He is God, He demands our complete surrender. He alone wants to have the first and the last word. He doesn’t like to share Himself with anyone or anything else. Secular humanism doesn’t liberate, but enslaves. Jesus said: “If you hold to my teaching, you are really my disciples. Then you will know the truth, and the truth will set you free” (John 8:31).

I am a Priest with ROCOR.
View all posts by padrerichard →
This entry was posted in Uncategorized and tagged Christ, Christianity, God, Hilarion, Jesus, New Testament, Sophia (wisdom), United States. Bookmark the permalink.